The Los Angeles Auto Show, like almost all other trade shows and consumer events last year, was canceled due to the coronavirus pandemic. Usually the show takes place in the City of Angels in late November.

Despite efforts to postpone it at some point, the 2020 edition never took place. As early as February we learned that the trade fair organizers had set new dates for this year and that these dates had just been officially announced: The Los Angeles Auto Show 2021 will open its doors to the public from November 19 to 28 at the LA Convention Center. Media and industry days will take place on November 17 and 18.

If the pandemic situation in North America continues to improve, we’ll be there.

The organizers are pretty optimistic that this will be the case; They aim to attract hundreds of thousands of visitors to the show, which this year will host a variety of more exotic brands such as Lucid, Karma and Fisker in addition to the more traditional banners.

Shopicar.com, 100% online, buy your next car, buy online and have it delivered to you anywhere in Quebec!

We are still waiting for the full list of participants; it still hasn’t been released on the show’s official website. There have been some big premieres in Los Angeles in the past, like the debut of the latest generation Porsche 911. But of course the pandemic has forced automakers to make online presentations, and these have been largely successful. Given that the cost of one of these presentations is significantly less than a more traditional presentation, some companies may choose to bypass auto shows in the future. In any case, the organizers promise that a complete list of the participating manufacturers will be published shortly. We can then speculate about what they want to present.

The organizers’ press release now gives an impression of the excitement:

“We pride ourselves on being an integral part of LA culture and a must on the calendar. With California and LA Counties opening up, we are committed to putting on a dazzling show to bring SoCal an experience to look forward to and a dynamic environment for automakers and lifestyle brands to inform and entertain can.”

The question also arises as to which health-related measures may remain in place during this phase of the pandemic. Time will tell, but the 2021 Chicago Auto Show opens July 15th and will surely give us an idea of ​​what to expect at future shows. 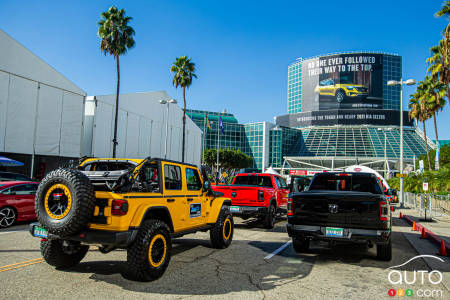 Outside the show in Los Angeles 2019